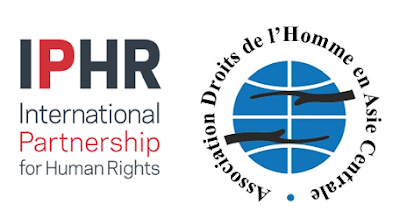 Since October 2017, 29 civil society activists have been released from prisons in Uzbekistan (see list below), giving a clear sign of a move towards liberalization of treatment of those who are critical of the authorities. However, these releases have not significantly changed the attitude of the ruling authorities in Uzbekistan towards the free expression of opinion, especially if criticism of the authorities is involved.

Our analysis shows that those released activists remain on confidential "black" lists kept by the intelligence services. Former prisoners are kept under supervision for longer periods of time than those provided for in the criminal-procedural code. By law, former prisoners are required to register with the internal affairs each month for the first year following their release, but in practice some former prisoners are told to do this for up to three years, during which time the threat of re-arrest for violating the terms of supervision (parole) regime remains present.

These restrictions are imposed by the authorities in the name of crime prevention. However, in practice they impede former prisoners from moving freely, both within the country and abroad, even for urgent medical care. On 4 December 2017, former Member of Parliament Murad Djuraev[1] died in Uzbekistan. He was released from detention in 2015 after serving 21 years’ but was not given permission to leave Uzbekistan until October 2017, and did not manage to leave before he died.

The grounds for release from detention of these activists was either early release or else because they had served their prison sentences. None benefitted from amnesty.

Over the past decades in Uzbekistan, there have been no cases of former prisoners imprisoned on politically motivated grounds being rehabilitated or pardoned. It is therefore too early to regard the recent releases as a concrete sign of political reform, as the representatives of the Uzbek government would have the international community believe.

The articles of the Criminal Code which are used against civil society activists and which were regularly used under former President Karimov against dissidents and critics and which are still in force today include:
– 120 "homosexuality",
–  159 ("Violations of the constitutional system of the Republic of Uzbekistan"),
–  223 ("Illegal departure abroad or illegal entry into the Republic of Uzbekistan").
–  244-1 ("Making or distributing materials containing a threat to public safety and public order").
–  244-2 ("Creation, leadership, participation in religious extremist, separatist, fundamentalist or other prohibited organizations").
–  221 ("Disobedience of the lawful requirements of the administration of the institution for the execution of punishment"). This article is very often applied to prisoners serving politically motivated sentences with the aim of extending their term of imprisonment. The charges of violation of prison rules are often obtained from other prisoners in exchange for a reduction of their prison terms. According to our information few charges have been brought under this article since August 2017.

Currently, independent journalists and correspondents of the "Fergananews" news agency, Bobomurod Abdullayev and Khayotkhon Nasreddinov, are standing trial on what may believe to be politically motivated charges. Bobomurod Abdullyaev and Khayotkhon Nasreddinov both told the court in March 2018 that they were forced to confess under duress and torture.

In order to achieve lasting reform on the political sphere, it is imperative that President Mirziyoyev’s government undertakes the following steps:
1) Rehabilitate civil society activists, independent journalists and political activists who have been released from detention and those who are currently serving prison sentences in retribution for their peaceful professional activities;
2) Ensure that those who are released from detention are allowed freedom of movement in order to seek necessary medical attention abroad;
3) Review the cases of civil society activists, independent journalists and those who were imprisoned on politically-motivated grounds in retribution for their peaceful activities and, should it be found that they were wrongfully arrested ensure that they receive adequate monetary compensation for moral and physical harm;
4) Establish a commission to determine the personal responsibility of state representatives who issued prison sentences for politically motivated reasons, as well as those involved in torture and other forms of cruel and inhumane treatment;
5) To bring all officials involved in the practice of torture to justice in fair, transparent proceedings.
6) To establish a truth and justice body including international experts to investigate past human rights violations and ensure that those found guilty are brought to justice in fair and transparent proceedings.

Civil society activists and journalists who remain in detention include:

8. Ganikhon Mamathanov (Committee for the Protection of the Rights of Persons of Uzbekistan);

17. Yusuf Ruzymuradov, (Correspondent of the newspaper "Erk" of the same name of the opposition party "ERK");

18. Muhammad Bekhanov, (Correspondent of the newspaper "Erk" of the same name of the opposition party "ERK");

19. Erkin Musayev, (former UN staff formerly worked in the Foreign Trade Department of the Ministry of Defense, engaged in international cooperation programs with Western governments, including the United States and the EU);

22. Kudratbek Rasulov, (Member of the People's Movement of Uzbekistan (NDU));

23. Rustam Usmanov, (Former Deputy of the Parliament of Uzbekistan);

[1] Murad Djuraev died on 4 December 2017 – he was not given permission to travel abroad for necessary medical treatment for nearly two years. https://ahrca.eu/uzbekistan/defenders/976-murad-djuraev-has-passed-away-but-will-live-forever-in-our-hearts
[2] On 14th February 2018, the wife of Uzbekistani academic Andrei Kubatin published an appeal to the Ombudsman for Human Rights on her Facebook page in which she said that her husband had been convicted of treason by a military court on 1st December 2017 and sentenced to 11 years’ imprisonment.The prosecution claimed that Kubatin had sold electronic books, allegedly from the Central State Archive of Uzbekistan and the Institute of Oriental Studies of the Academy of Sciences, to a foreign citizen (the then head of TIKA – Turkish Cooperation and Coordination Agency under the Ministries of Foreign Affairs of Uzbekistan and Turkey – Suleiman Kiziltoprak) for 1,000 USD. The prosecution claimed that these books could be used for pan-Turkism propaganda, inciting inter-ethnic and inter-religious hostility, as well as for obtaining information about the geological wealth of Uzbekistan. TIKA employee Muzaffar Zhoniyev, who was present at discussions between the academic and Kiziltoprak, wrote to the SNB. Kubatin alleges that a number of procedural violations were committed during the trial. For example, the academic believes that the assessment of the value of the materials transferred was not objective. On 21st February 2018, Radio Ozodlik reported that well known academics appealed to President Mirziyoyev to review the case personally.

In accordance with paragraph "C" of the Resolution of the European Parliament on Human Rights in Uzbekistan (2014/2904 (RSP))[1], in accordance with Rules 135 (5) and 123 (4) of the Rules of Procedure, a list of 34 prisoners was adopted, including public, political and religious figures, victims of the Andijan tragedy, who were deprived of liberty for politically motivated reasons.

On 11 April 2018 the International Partnership for Human Rights, Association for Human Rights in Central Asia and Amnesty International delivered a statement during the pre-session for the UN Universal Periodic Review (UPR) of Uzbekistan’s human rights record to be held in Geneva, Switzerland, in May 2018. The organizations highlighted some of the main concerns, including violations of freedom of expression and association and torture and other ill-treatment, and called on the representatives of Permanent Missions to the UN to raise these concerns with the Uzbekistani authorities. 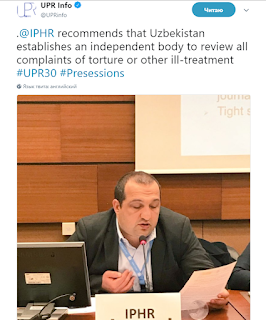 During the last UPR, Uzbekistan received 203 recommendations of which it accepted 145, of which it considered 30 as already implemented, and rejected 58.

Since coming to power, President Mirziyoyev [Mirzioiev] has taken some positive steps to facilitate external scrutiny of the situation in Uzbekistan, such as allowing visits by the UN High Commissioner for Human Rights and the UN Special Rapporteur on freedom of religion or belief, and some international human rights organizations to Uzbekistan. Under the President’s leadership Uzbekistan has also eased certain restrictions on freedom of expression and the media, undertaken a programme of judicial reform to ensure judicial protection for the rights and freedoms of citizens, and released a number of government critics, including human rights defenders and opposition political activists, who served long prison sentences on politically-motivated grounds.

However, research by our organizations show that the government has failed to implement key recommendations from the last UPR with respect to accountability, freedom of expression and association, and freedom from torture and other ill-treatment. I will highlight some of our main concerns:

Freedom of expression and association:
Uzbekistan has failed to comprehensively address unwarranted restrictions on civil society's ability to exercise their fundamental rights to freedoms of expression, assembly and association, and we remain deeply concerned by the ongoing politically-motivated persecution and imprisonment of human rights defenders, independent journalists and government critics. Tight state controls on NGO registration, funding and activities, coupled with ongoing restrictions on freedom of expression and access to information, prevent independent media outlets and human rights NGOs from operating effectively and safely in Uzbekistan.

We urge Permanent Missions to address the following key recommendations to Uzbekistan during its upcoming review:

Despite the President's judicial reform efforts and his November 2017 decree explicitly prohibiting the use of torture to obtain confessions and their admission as evidence in court proceedings, judges continue to ignore or dismiss allegations of torture or other ill-treatment as unfounded, even when presented with credible evidence in court. For example, in a recent case a judge invoked the President’s decree and ordered an investigation into torture allegations made by two independent journalists after they presented credible evidence in court that they had been tortured to compel them to confess. However, the investigation was not independent, impartial and thorough, and concluded that it was impossible to establish the cause of the defendants’ injuries. Nevertheless, the judge admitted the confessions as evidence. The procedural violations which occurred, when both defendants were held for substantial periods of time in incommunicado detention heighten concerns that the investigation into their torture allegations was flawed.

We urge Permanent Missions to address the following key recommendations to the government of Uzbekistan:

More information and recommendations on these and other issues can be found in our reports.

Thank you for your attention!

The report can be downloaded 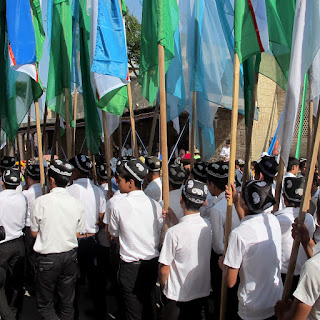 In May 2018 Uzbekistan’s human rights record will be scrutinized in the framework of the Universal Periodic Review (UPR), a state peer review mechanism carried out under the auspices of the UN Human Rights Council.
A submission for this review prepared by Association for Human Rights in Central Asia (AHRCA), International Partnership for Human Rights (IPHR) and CIVICUS outlined the failure of Uzbekistan’s government to implement key recommendations it received during the previous UPR of the country in 2013.
This joint report prepared by AHRCA and IPHR provides an update to the October 2017 submission, outlining developments which have occurred since October 2017 pertaining to the rule of law and highlights ongoing human rights concerns including torture, ill-treatment and poor prison conditions and limitations on the freedom of expression and assembly. The document raises concerns that independent journalists continue to be imprisoned and subjected to torture and ongoing cases of government critics who face persecution, harassment and who are subjected to travel restrictions.  It concludes with recommendations to the Uzbekistani government.
IPHR representatives are attending the pre-session meeting for the UPR review in Geneva on 11 April, and will be presenting joint statements highlighting our ongoing concerns.