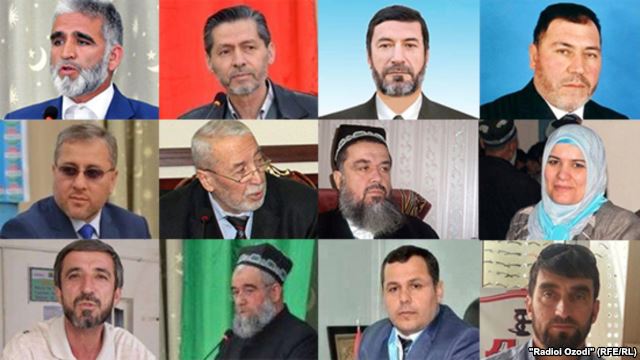 On 9 February 2016, Tajikistan’s Supreme Court begins hearing the cases of 13 leading members of the banned Islamic Renaissance Party of Tajikistan (IRPT). The trial will be held behind the closed doors since it has been “classified”.

The relatives of the defendants have been invited to court on 8 February, one day before the start of the process.

All 13 leading IRPT member were arrested on 16-18 September 2015, after the conclusion of the special security operation initiated against the armed group of Abduhalim Nazarzoda over two armed attacks that took place in Tajikistan at the beginning of September. The Tajikistani authorities have accused IRPT leader Muhiddin Kabiri (who is in exile) and the whole party of involvement in these armed attacks. On 29 September 2015, Tajikistan’s Supreme Court declared the IRPT a “terrorist” and “extremist” organization.
Immediately after the arrests of IRPT members, there were reports of the confiscation of property of party members, as well as pressure on their relatives, including under-age children. Many relatives of arrested IRPT members were dismissed from their jobs on the basis of what appears to have been unofficial orders by the Tajikistani authorities. IRPT members are subjected to widespread discrimination.

The charges against arrested IRPT members are largely based on confessions believed to have been obtained under duress. The prosecutor signed off on the indictment and the case was handed over to court. As the trial will be held behind the closed doors, procedural violations will not be disclosed to the public, and the proceedings are likely to be only formal in nature.

The defendants in the trial include:

— Saidumar Husayni (born 1961), first deputy chair of the IRPT, member of the political council and presidium of the party, previous MP, has a PhD degree in philosophy.

— Muhammadali Hajit (born 20 October 1957), deputy chair of the IRPT, member of the political council and presidium of the party, former officer of the military intelligence service of the Soviet Union, holder of the Soviet Red Star order.

— Abdukahhori Davlat (born on 5 August 1975), member of the political council and presidium of the IRPT, head of the department of external relations of the IRPT.

— Rahmatulloi Radzhab (born on 5 June 1958), member of the highest political council of the IRPT, chair of the IRPT department for district branches and head of the election department.

— Zubajdulloi Rozik (born 1946), member of the political council and presidium of the IRPT, head of the IRPT department for science, former imam at a mosque in the Gozmalik district, former chief editor of the IRPT publication “Nazhot”.

— Hikmatullo Sajfullozoda (born on 1 March 1950), member of the political council and presidium of the IRPT, chief editor of the IRPT publication “Nazhot”, former press secretary of IRPT, former member of the Central Election Committee, journalist and political scientist.

— Kijomiddin Avazov (born on 24 June 1973), member of the political council and presidium of the IRPT, head of the IRPT branch in Dushanbe, previous chair of the party department for youth and sports, previous party functionary and expert on the Arabic language.

— Zarafo Rahmoni (born on 23 February 1972), member of the political council and presidium of the IRPT, lawyer and journalist.

— Muhammadsharif Nabiyev, member of the highest political council if the IRPT and head of the IRPT branch in the city of Kulyab.

— Abdusamad Gayratov (born 1962), member of the highest political council of the IRPT.

— Sattar Karimov (born 1959), member of the highest political council of the IRPT.

Zarafo Rahmoni has four children, the youngest of whom is not yet seven years old. She has serious health problems and suffers from heart and kidney pain, nervous exhaustion and severe depression.

Throughout the investigation, neither Zarafo’s sister nor representatives of the Red Cross have been allowed to visit her in the pre-trial detention facility where she has been held in Dushanbe.

Her two lawyers, Sitor Azizov and Zaydullo Davlatov have, however, been allowed to visit her and have also brought her medicine and food. They saw her the last time on 15 January 2016, when she familiarized herself with case materials. On 18 January, the case was handed over to court. The lawyers have not told Zarafo’s relatives any details, out of fear of losing their lawyer’s licenses.

Zarafo’s relatives are allowed to pass on medicine and food to her once a week. On 20 January 2016, her oldest and youngest son were able to meet her for the first time since her arrest.

IRPT members who have already been sentenced to imprisonment:

IRPT members who have had their passports confiscated and who have been ordered not to travel anywhere:

IRPT members who have been declared wanted:

The Association for Human Rights in Central Asia (AHRCA) has received information about the arrest of 93 IRPT representatives. However, this is not exhaustive information. The scope of the repression against party members is much wider. Many are intimidated and afraid to provide information about such repression.
*  *  *
The ACHRA considers that the IRPT was declared a “terrorist” and “extremist” organization on politically motivated grounds.

The organization calls on the EU, the OSCE, the United States and other international partners of Tajikistan to demand that the authorities of the country respect their international human rights obligations. The authorities of the country should ensure the right to freedom of association, assembly, expression and religion, as well as impartial and fair trials, where the principle of equality of arms is upheld. Those who are guilty of torture and ill-treatment should be held accountable.